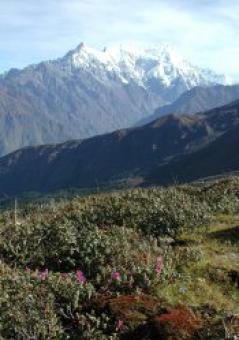 Alpine pasture
The Himalaya  – deriving from the Sanskrit (him snow, alaya abode), the Himalaya consists of a collection of massive mountain ranges rising abruptly from the midlands, extending beyond Nepal across Bhutan in the east, and into Pakistan in the west. Most of the peaks have permanent caps of snow and ice, with glaciers on their flanks, and the gorges that cut this range are some of the deepest in the world. Sagarmatha (Mount Everest), the highest point on earth at 8848 m, is part of this range. The snow line occurs between 4500 and 6000 m, depending on precipitation. Permanent settlements were traditionally found up to about 3900 m (e.g. Khumjung) with seasonal encampments at higher altitudes. Today settlements catering for trekkers and mountaineers are found at higher altitudes (e.g. Gokyo, 4790 m). The regions above 6000 m are considered arctic desert or nival zone.

High Mountain Valleys (or Inner Himalaya) – are found north of the high Himalaya, before the Plateau of Tibet. The high mountain valleys (e.g. Bheri and Upper Kaligandaki) lie between 1970-4500 m. They are typically orientated east-west, cradled by high mountains, scoured out by past glaciers long retreated. The high Himalaya forms a major barrier to the northern progress of the summer monsoon, and so the High Mountain Valleys lie in rain shadow and are barren, arid areas (see climate below). 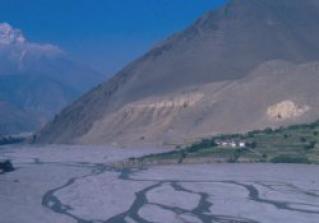 Kali Gandaki valley
Tibetan Marginal Mountains (or Trans-Himalaya) – are found in the north-westernmost parts of Nepal (north of Dhaulagiri and Annapurna Himals), at 6000-7000 m, and line the southern margin of the Tibetan Plateau. They comprise a series of peaks that were the first formed about 45 million years ago at the start of the Himalayan mountain building process. This mountain range laid the foundation for the main watercourses, and forms the watershed between the two great rivers the Ganga (Ganges), to the south, and Brahmaputra (Tsangpo), to the north. The higher, but later formed, mountains of the High Himalaya did not alter the general southward flow of the main rivers. Amonst these rivers the high desert regions of Mustang, Manang and Dolpo can be found. These areas are in deep rain shadow, with stark eroded crags typical of the scenery. 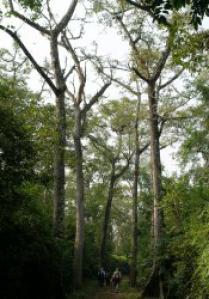 Subtropical forest
Terai (Tarai) – a narrow strip of flat, fertile alluvial soil of the Gangetic plain of India up to 40 km wide that runs along the southern border of Nepal. Altitudes range from 60 m (Dhanusha) to 330 m, with an average ca. 200 m. Tropical forests predominate, but these have suffered greatly through lopping and felling of trees for agriculture (see conservation). Little remains in eastern and central Nepal, but fine forests can still be found in the west. Most of Nepal’s arable land is found in this narrow belt of about 21,000 km², giving rise to its reputation as the 'granary of Nepal'.

The Terai was once highly esteemed for big-game hunting in the cold season, but shunned for the rest of the year as a virulent form of malaria was prevalent in the dense, steamy jungles. In earlier times this malaria belt was considered an important asset in the defense of Kathmandu, and actively maintained. However, following improvements in relations between Nepal and India at the start of the twentieth century, efforts were made to clear the land for cultivation. This was accelerated in the mid 1950’s when malaria was eradicated by a government program of widespread DDT spraying. With the fear of the disease removed, mass migration from the hills ensued, dramatically increasing pressures on the environment.

Five protected areas have been established to conserve the rapidly disappearing lowland forests and wildlife, and all ten of the Terai ecosystems are well represented within these.
Based on Hagen, 1960 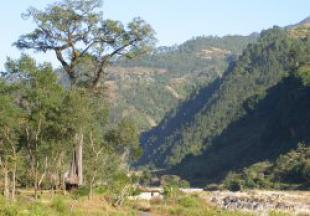 Siwalik Hills
Siwalik Hills (including the Chure Hills)  – rise abruptly from the Terai plains from about 120 m to almost 1800 m (average ca. 1000 m) and are comparatively sparsely populated because of lack of water in the dry season. This zone is wider in the western and far-western development regions of Nepal and narrower in the east. The underlying rocks are young sedimentary deposits (sandstones and conglomerates) overlaid by porous soil low in organic matter. The area has serious problems with soil erosion, degradation of water catchment areas and diminishing agricultural productivity.

This region includes the Bhabar which comprise a narrow (8-12 km wide) but continuous belt of forest, known locally as Char Kose Jhadi. The Bhabar is formed by the accumulation of gravel, boulders and alluvium washed down from the foothills. This area is very dry for most of the year, except in monsoon when large, seasonal streams carry the surface run off down into the plains.

The Dun (Doon) valleys [also known as the Inner Terai or Vitri Madhesh] are long, broad, gently sloping valleys, and are generally more populated than the rest of the Siwalik Hills region. As for the Terai, the Dun valleys lost much (but not all) of their forest cover following the eradication of malaria and mass migration in the 1950’s. Important Dun valleys are Dang Valley in western Nepal, Chitwan Valley in central Nepal, and Trijuga Valley in eastern Nepal. Dun valleys have very fertile soil and plentiful water and so are under intensive cultivation. However, due to the removal of forest cover they have suffered serious soil erosion in recent years. [note: Hagen recognised the Inner Terai as a separate zone in his eight-zone topographic classification.]

Four protected areas have been established, but only five of the 13 Siwalik Hills ecosystems are included. The environment outside these protected areas remains under great pressure from exploitation and agriculture, and so the protected area network needs to be extended to provide more coverage in the Siwalik Hills.
Mahabharat Lekh (Mahabharat Mountains/Range) – (also known as the Inner Himalaya range) lies to the north of the Siwalik Hills, occupying the central part of Nepal. The mountain ranges run east to west, are up to 2750 m, and are composed of hard, metamorphosed, sedimentary and igneous rocks of different ages (e.g. granite, quartzite and limestone). The climate is cool and humid, and the soils are water-retentive, allowing cultivation on the characteristic terraced steep hillsides. The mountains are sparsely populated above 2000 m, but deep valleys (some down to 200 m) cut by the few major south-flowing rivers are more densely populated and were the main trade routes before the road network. Small settlements ('garhis') dot the hills where traditional trade routes crossed the range. Originally established for defensive purposes, the garhis with their stone buildings with slate roofs have also served as custom posts and check points. Most human development is in this zone is in eastern and central Nepal. 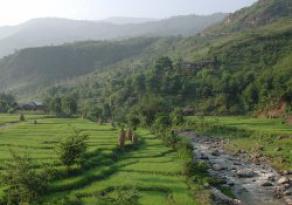 Padi fields
Midlands (or Pahad)  – lie to the north of the Mahabharat Lekh, at the heart of the country, and contain the important high valleys of Kathmandu (ca. 1400 m altitude, ca. 780 km²), Pokhara (ca. 900 m altitude, ca. 390 km²), Trisuli and Banepa. This is the most heavily populated part of nepal where almost half (44.2%) of Nepalese live today favouring the mild climate of this region. Elevations range from 600 to 2500 m (average of 1980 m). Geologically the midlands consist of crystalline and metamorphic rocks (granites, gneisses, quartz and schists). The soil is very fertile and agriculture is intensive, particularly in eastern and central parts, with terraced fields to the tops of the hills. Forests have been severely degraded in this region and the rate of soil erosion is alarmingly high.