An introduction to the floristic regions of the World
The vegetation types of the World can be categorised into units that reflect internal consistence and external links. Biogeographers term these phytogeographic 'taxa' as phytochoria (singular phytochorion). As patterns in vegetation change are rarely clear cut it is difficult to place exact geographic boundaries around phytochoria. Areas of overlap are common where transitional vegetation types are seen, these are sometimes termed vegetation tension zones.

Several systems of phytochoria have been proposed, most organized hierarchically. In zoology there are different systems of faunistic classifications, some have similarities with the phytochoria, others have significant differences. Some systems now take into account both plant and animal species.

Ronald Good (1964) proposed a system of six floristic Kingdoms (Australian, Antarctic, Boreal, Neotropical, Paleotropical, and South African) as the largest natural units for flowering plants. The Kingdoms were subdivided into Subkingdoms, Provinces and Regoins. The Paleotropical Kingdom was first divided into 3 Subkingdoms, whereas each of the other five kingdoms were subdivided directly into Provinces totalling 37 Provinces.
Criteria for phytochorion ranks (following Takhtajan, 1986)
Kingdom (syn: Realm): Characterised by high levels of endemic families, sub-families and tribes and very high levels of species endemism.

Provinces: Characterised by high levels of species endemism (but not usually genera unless monospecific) and assemblages of corrulated families. 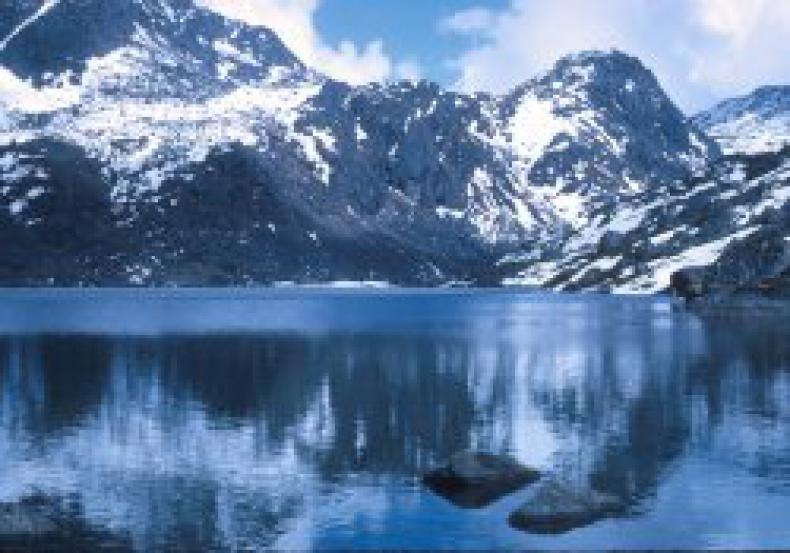 Alpine lake
Nepal has a complex biogeography due to its past geological history and its presence at the cross roads of two bio-geographic realms (the Palaearctic and the Indo-Malayan realms, Udvardy 1975), and two major phytogeographical Kingdoms: the Holarctic division in the north and Palaeotropic division in the south.

Adding variety are also plants from arid highlands of the Tibetan Plateau (Central Asian elements) in the north, and in the southern lowland plains (Terai) plants from the Indo-Gangetic elements (Indochinese and Indomalayan regions) are found representing widespread species from the humid tropics that extend deep into SE Asia.

Understanding the distribution of plants within the Himalaya thus requires an examination of both the floristic regions found in the area (see below) and the geological history of the Himalaya (see the Himalaya page). 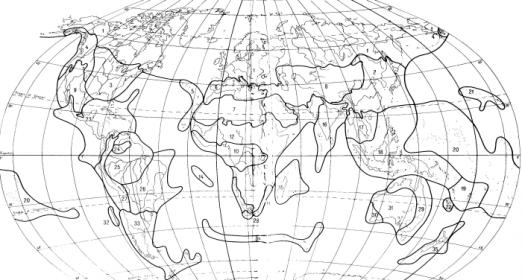 Takhtajan's floristic regions in relation to Nepal. Region numbers in the above map refer to the following paragraphs
Districts: Characterised by high levels of infra-specific endemism.
Holarctic Kingdom [palearctic]

Boreal subkingdom: East asiatic [sino-japanese] region (2): Eastern Himalayan province
From the Kali Gandaki Valley (ca. 83° E) in W Nepal eastwards towards a poorly defined eastern limit around Namche Barwa, all lands above 1000 m. Includes central and eastern Nepal, Sikkim and Darjeeling, Bhutan and the Assam Himalaya. Characterised by monsoon climate, and contains a number of endemic and near endemic genera and many endemic species. Rhododendron species are well represented with 30 in Nepal and 45 in Bhutan. Other characterisitc species include: Abies densa, Pinus bhutanica, Larix griffithiana, Cupressus corneyana, and Rheum nobile. This province is one of the youngest floras in the region, formed by dispersal from mountains of China, Burma, Assam.
Tethyan subkingdom [ancient mediterranean]: Irano-turanian region(8) Tibetan Province.
Primarily the Tibetan Plateau, but also encompasses some or all of the Pamirs in far west Himalaya. A very young flora which is not species rich (probably less than 1000 species). Affinities largely lie with the Irano-Turanian and Central Asiatic regions. Central parts of the plateau are dominated by halophytes, whereas the mountainous borders are typically inhabited by cushion-forming plants, hemicryptophytes and geophytes. Southern areas between the Transhimalaya and Himalaya are dominated by open communities ('gravel deserts') of dwarf perennials.
Tethyan subkingdom [ancient mediterranean]: Irano-turanian region (8): Western himalayan province
Eastwards across the Himalaya from the Kali Gandaki Valley in Nepal (ca. 83° E), all lands above 1000 m. Includes Kashmir, Simla, Mussoorie and Naini Tal. Characterised by monsoon climate. There are strong florisic links with the Iranian highlands and the Mediterranean flora (region 7): this is the easternmost range of several Mediterranean plants, e.g. Arbutus undeo and Myrtus communis. This is a transitional zone between the ancient Mediterranean (Tethyan) and E Asiatic floras, but the Irano-Turanean elements dominate. Characteristic species include: Cedrus deodara, Abies pindrow, Picea smithiana and Cupressus torulosa. Rhododendron species diversity is not as great as further east, but includes R. arboreum, campanulatum, anthopogon, barbatum, afghanicum (endemic) and colletianum (endemic).
Pelaotropical kingdom
African subkingdom: sudano-zambezian region (12)
Covers a huge area from the Atlantic coasts of southern Mauritania, south to the Cape region, northeastern and eastern tropical Africa, tropical parts of the Arabian Peninsula (including Socotra), tropical deserts of Iran, Pakistan and NW India. The main vegetation types are open woodland, savanna and grassland characterised by genera such as Combretum,Terminalia, Brachystegia and Hyparrhenia. Within this region the Sindian provice is the area closest to the Himalaya.
Indomalesian subkingdom:  Indian region (16): Upper gangetic plain province:
Aravalli Hills and Yamuna River in the west to the Koshi River (E Nepal) in the east, including the terai areas up to 1000 m (foothills of the Siwaliks) and the entire lowlands of the upper courses of the Ganges. This province hasgenerally lacks endemics and forests have largely been destroyed. Sal (Shorea robusta) dominates where forest remains, and there are considerable areas of halophytic vegetation. In many places there are scattered Acacia trees, and on the most saline soils Salvadora persica is almost the only tree that succeeds.
Indomalesian subkingdom:  Indian region (16): Bengal province:
Koshi River (E Nepal) in the east to Arakan in Burma (Myanmar) in the west, including the terai areas up to 1000m (foothills of the Siwaliks) and the lower courses of the Ganges and Brahmaputra. A very rich flora of luxuriant vegetation due to the high rainfall, tropical semi-evergreen forest predominates. There are a few endemic genera and many endemic species.
Indomalesian subkingdom: Indochinese region (17)
The eastern borders of this region include the southeastern and eastern border areas of Bangladesh and adjoining regions of India. Also included are all tropical parts of Burma, Thailand and SW through Indochina and southern parts of China. The region includes over 250 endemic genera, but only one endemic family (Plagiopteraceae). The number of endemic species is hugh, and the natural vegetation is generally better preserved and considerably richer than the Indian Region. In contrast with the Indian Region the Indochinese Region is characterised by montane forests of evergreen species of Lithocarpus, Castanopsis and Quercus.
References
Good, R. 1964. The Geography of the Flowering Plants. John Wiley & Sons, Inc., New York. Takhtajan, A. 1978. [The Floristic Regions of the World]. Academy of Sciences of the U.S.S.R.. Leningrad. (in Russian)

Takhtajan, A., 1986. Floristic Regions of the World. University of California Press, Berkeley.

Wu, Zheng-yi and Wu, Sugong, 1996. A Proposal for a New Floristic Kingdom (Realm): The East Asiatic Kingdom and its Delineation and Characteristics. In: Proceedings of the 1st International Symposium on Floristic Characteristics and Diversity of East Asian Plants. China Higher Education Press, Beijing. 3-42.
Indicator species
Aesculus indica, Cedrus deodara are predominantly found in the west, Castanopsis hystrix and Larix griffithiana are predominantly eastern and central Nepal.