Fossils hold the key
Evidence for this mountain building activity can be found high in the mountains in Mustang and the Kali Gandaki valley where fossils of ammonites are found in large numbers. These marine animals lived in the Tethys Sea, and their shells were preserved in the sediments left behind when the land uplifted and sea retreated. These distinctive fossils with straight or coiled shells, have special religious significance for Hindus as the ammonite (shaligram in Nepali) is one of the many forms of their god Vishnu, and the fossils are often placed in shrines. There are many large ammonite fossils, some as large as 2 m across, in the pilgrimage destination Muktinath (Kali Gandaki Valley) 3600 m (12000 ft) above sea level.
Geological stages summary 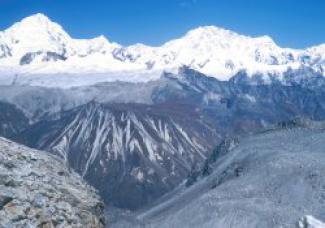 Himalayan landscape
The Himalaya is an immense series of mountain ranges that extends some 3200 km, from the Pamir Knot on the Afghan border eastwards through Jammu and Kashmir, Himachal Pradesh, Attaruncal, Nepal, Sikkim, Chumbi Valley, Bhutan, Arunachal Pradesh and the northern tip of Burma. The Himalaya finally ends in SW China where it merges with the Henguan Shan, a complex series of high mountains and deep river valleys running north-south. Some prefer a narrower definition of the Himalaya from the Indus Trench below Nanga Parbat (74°50' E) to the Yarlungtsangpo-Bramaputra Gorge below Namche Barwa (95°40' E).

The western extension of the Himalaya is the Baluchistan Arc that runs southwest from Kashmir through Baluchistan to the Arabian Sea. It continues through Makran as a low range of hills to finally join up with the Zagros Range in Iran.

Mountain building - two continents collide
The Himalaya is one of the most dramatic examples of plate-tectonic forces in the world. Formation of this immense mountain range began between 40 and 50 million years ago (mya), when the Indian and Eurasian plates were driven together. As both these plates are of similar density, composed mainly of geologically light continental materials (ancient granites, other sediments and metamorphic rock) over-lying heavy oceanic basalts, each resisted being forced down beneath the other (subduction). Instead, they stayed almost level with each other (the Eurasian Plate just over-riding the Indian Plate), thrusting upwards to relieve the pressure, buckling and crumpling in a series of mountain-building events. This resulted in an almost doubling in thickness of the crust at this point and the formation of the vast Himalayan ranges. 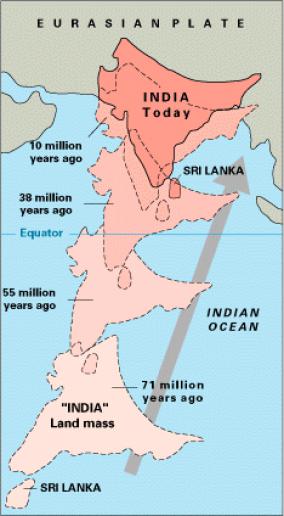 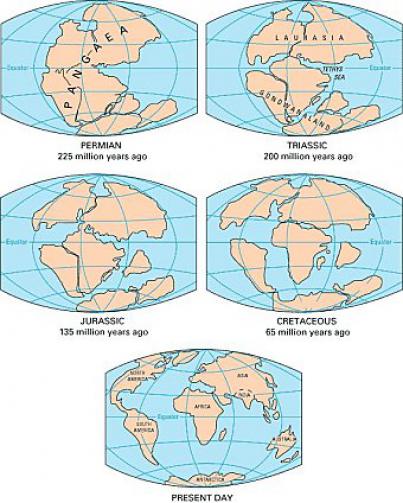 Movement of continents from Permian period to present 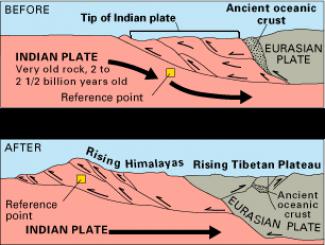 The Indian (Deccan) plate was once situated far south of the equator, joined to SE Africa and Madagascar, forming part of the supercontinent Gondwana. It was one of the first plates to separate, beginning during the Early Cretaceous some 165 mya. The Indian plate finally rifted away from Madagascar 98 mya and started its rapid 6000 km journey northwards across the Tethys Sea towards Asia. During the late Cretaceous (80-65 mya), the Indian plate was moving at more than 15 cm per year, much faster than any modern plate movement, before colliding with Asia (Eurasian plate) about 45 mya.

The formation of the Himalaya was not a single event, as there have been several major mountain-building episodes and the process continues today. After the Indian plate collided, the Australian plate was released from Antarctica and itself began to move northward towards SE Asia. During the Eocene (around 45 mya), 5-10 my after the initial India-Eurasia collision, the Australian plate reached the Indian Plate and fused with it. The increased the forces exerted by the now much larger plate had a profound effect on the Himalaya, causing an intense phase of mountain building and uplift. Although the northward drift of India has slowed dramatically, the two continents continue to converge. Currently the Australian-Indian plate migration is estimated as moving northeast at 20-27 mm per year, causing the Himalaya to rise by about 3-5 mm (some say more that 1 cm) each year.