Thermopsis barbata
Nepal is a classic ‘biodiversity-rich, resource-poor’ country where resources to support conservation and fulfil obligations under international conventions such as the Convention on Biological Diversity (CBD) are very limited. Widespread poverty is the major hurdle, as agriculture provides a livelihood for over 80% of the population, and with poverty levels in excess of 40% and a population growth rate of 2.23%, the pressures on natural habitats are escalating.

Nepal is a small country, covering only 0.09% of the Earth’s land surface, but it is very important to global conservation as it is at the heart of the Himalayan Region - one of the world’s top 20 hottest global biodiversity hotspots, and the many and varied habitats support a great diversity of living organisms. It is estimated that 7000 higher plant species occur in Nepal, with some 300 of these only found in (endemic to) Nepal. Nine species of flowering plants are now suspected to be extinct in Nepal, eight of these were endemic species (Shrestha & Joshi, 1996). 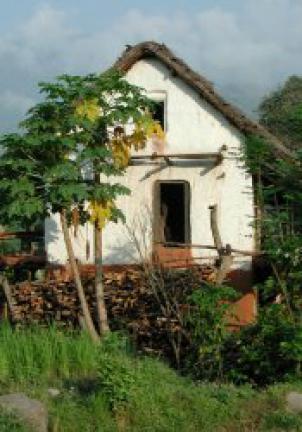 Traditional house
Almost all of the 27 million people in Nepal depend on plant resources for their very livelihood, and ever increasing pressures from a burgeoning population and industrialisation take their toll on the environment. Nepalese culture has always respected the preservation of plants and forests, and there is a long history of conservation awareness: many sacred forests have been preserved for centuries according to deep-rooted religious traditions. A great deal of effort has been made over recent years to protect and manage biological resources and biodiversity. Government of Nepal began implementing its National Conservation Strategy in 1988, and in 2002 reiterated the importance of conservation through the publication of the Nepal Biodiversity Strategy (NBS 2002). This strategy states that “Biological diversity in Nepal is closely linked to the livelihoods and economic development of most of her people, and relates to agricultural productivity and sustainability, human health and nutrition, indigenous knowledge, gender equality, building materials, water resources and the aesthetic and cultural well being of our society."

Much of the loss of habitats occurred over a thirty-year period (1950-1980) when there were little controls on development. However, Government of Nepal is now fully committed to conservation and legislation is in place to help combat problems and Nepal is actively addressing its obligations as a signatory to the CBD. Implementing conservation measures is not easy in rural areas where the land and surrounding forest are used for subsistence, and it is recognised that long term solutions must also include elements of poverty alleviation and sustainable development. However, there have already been some successes, as a good network of protected areas has been established, and there is evidence that the extent and quality of forest cover has increased since 1980. The NBS concludes that “despite the conservation benefit provided by the PAs [protected areas] network, biodiversity loss in Nepal continues unabated." The most critical threats to conservation is deforestation, habitat destruction and unsustainable harvesting of wild populations.