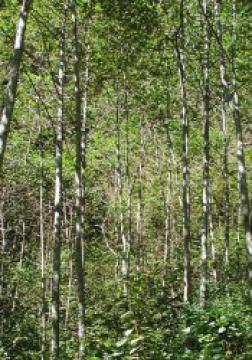 Midhills forest
Forests play a vital role in maintaining the ecological balance and economic development in Nepal. They  are a major source of energy, animal fodder and timber, and forest catchment areas are the main sources of water used in hydro-electric power generation, irrigation and domestic supply. Tourism is a vital source of foreign exchange for Nepal, and many ‘ecotourists’ come to visit wilderness areas and highly value pristine forests (45% of foreign tourists visit at least one of the protected areas).

Today forests extend over about 29% of the land surface, but this is a fraction of the original cover. Historically deforestation in Nepal has occurred over thousands of years (especially in the Mid-Hills), with a sharp increase in recent times following the end of Rana rule in 1950. At that time taxation of arable land provided important revenue, and the state offering tax reductions for three years after clearance for arable land. Under this strong incentive forests disappeared fast in the Mahabharat Mountains and Midlands. Other pressures on timber supply came from increasing demands for charcoal (especially for smelting iron ore) and construction. In 1966 forest cover was estimated at 45%, but between 1979 and 1994 this fell by 9% (NBS 2002), and current annual rates of deforestation are estimated at 1.7%. Quality of forest cover has also declined as shrubland has doubled in area from 4.8% in the mid-1980s to 10.8% in the mid-1990s (Ministry of Population and Environment website). 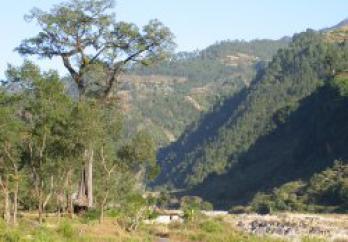 Siwalik hills
Two events of the early 1950’s had profound consequences for the forests of Nepal. The first was a change in the legal control of forests, the second was the eradication of malaria in the Terai. Until 1950 forests were governed by a feudal system with general management in local hands following sustainable traditional working practices. In 1957 all forests were nationalised with the Forest Nationalisation Act. This had a devastating effect as it broke the traditional relationship between the community and the forest. There was no compensation for private forest owners and they converted their private forest into farmland to prevent the government from claiming it. Parts of this damaging legislation have now been revoked and some forests (e.g. Community, Leasehold and Religious Forests) have reverted back to local management with good results. Until the 1950’s the malaria-infested belt of thick tropical jungle of the Terai was an effective barrier to marauders from the south, and forest cover was actually promoted to increase the effectiveness of this shield. However, mass migration into the fertile lowlands of the Terai and Siwalik Hills followed the eradication of malaria in the 1950’s, and large areas of the forests were cleared for agriculture.
Forest biological diversity is a priority programme for the Government of Nepal and the main focus for CBD activities. With such high poverty levels in Nepal, encroachment on forest lands for the expansion of agriculture or habitation is understandable. Furthermore, villagers have little alternative to wood for fuel (traditionally wood constitutes over 80% of their energy needs) and about 40% of livestock feed is obtained through lopping of trees for fodder. Although the cutting of trees for fuel is prohibited, this is very difficult to enforce and illegal cutting is rampant. In the moist, broadleaf Eastern forests the under planting of Cardamom (Amomum subulatum) as a cash crop is particularly damaging as although the upper layers of the forest largely remain intact, the natural ground-cover is removed and regeneration is prevented. Conservation has to go hand in hand with poverty alleviation as rural people rely on the wild resources for their very livelihood.